SEEING it THROUGH the HORSES' EYES

Let's take a brief journey, and trot with me down the winding and foggy roads of the evolution of the modern horse, horseshoes, and when, and/or where it all began.

Personally, I think history is a bit like walking with your head in the clouds and you only realise when you stumble, that you have actually left the straight path, which is where life usually becomes interesting.

Let's take a look back to the Eocene times about 50 million years ago or so when it all began, and the woodlands of the North American Continent gave way to some grassy plains.

A fox-sized creature that could previously hide from Rex and his friends in the forest, stuck its nose out into the open and found himself an easy target for a quick snack. Being confronted with this new lifestyle, over the Pliocene time (about 2.5 - 5 million years ago), this tiny creature evolved with single large toes on its feet, more teeth, larger in size, and with the ability to run faster, culminating the beginning of the modern horse genus Equus.

For this poor little creature, the battle was now on for survival.

For better feeding grounds, and to escape predators, many of these little guys took the opportunity during the last Ice Age some 12 thousand years ago to make their way over the Bering Land Bridge into Eurasia (Asian Steps, Mongolia, and Eastern Europe).

This saw the final extinction of the proto-type horse from the Northern American continent.

It then continued to flourish in his newly found homeland, but little did he know about the Eurasian Nomads, who would dig their teeth into any tucker they could catch.

However some 6000 years ago the Nomads must have had their chance while watching some of these early horses grazing in a gorge, they blocked the exit off and herded them for later use. 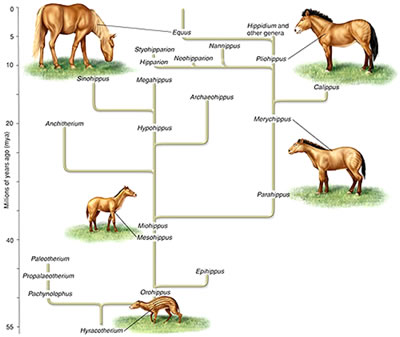 This could well have been the first attempt of domesticating the horse. Some imaginary wild rodeos later, the Eurasian Nomads conquered as the first Horsemen new places where they had never been before.

Euphoric about the joy of riding, and being able now to cover more ground in a shorter time, they also realised that the distance of their newly found transport was restricted if they would not protect the horse's hooves.

Innovative as they were, they made a kind of horseshoe - a first-ever, from raw hides, in which they placed woven grasses, and strapped it around the lower leg. This protected and also cushioned the hooves.

Sculptures and pictures also showed that they made saddles, stirrups, bridles, and bits.

By now, the Nomads started to conquer foreign lands, and entered the European Continent on horseback, on a hit and run basis, right into the horse-less Roman Empire State.

As sophisticated as Roman civilisation was at this time, they were no match against the riding Conquistadores from the East. However they caught or traded some horses during this intervention, and so the course of a final journey of the modern horse was set, and with it the metal (iron) horseshoe.

The Romans re-invented and manufactured the first-ever metal horseshoe, which was known as the Hippo Sandal. Leather strips were attached to the plate and strapped around the lower leg, which supported the whole of the hoof. 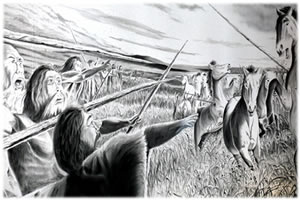 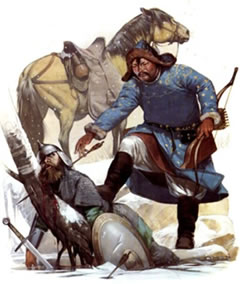 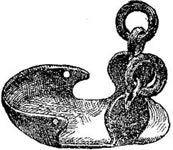 By the sixth and seventh centuries, European horsemen had begun nailing metal shoes to the horses' hooves. This would have been an invention of someone who had to make a truck payment.

During the fourteenth century, the design of shoes changed, as metal became a more valuable commodity, and any worn-out items were generally reforged. The newly shaped shoe resembled the rim shoe of today.

The hot-shoeing process became common in the sixteenth century.

The ancient craft of blacksmithing lifted man from the Stone Age, and the Blacksmith’s art reached its pinnacle in the middle-Ages, with some of them adapting their skills to horseshoeing. Though horseshoes changed little, the Farriers' work remained hard and stressful.